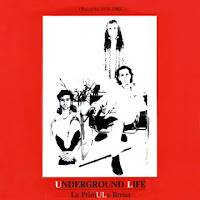 It was a real pleasure to see recently a new interest in one of the best italian band of the eighties, Giancarlo Onorato's Underground Life from Monza, close to Milan. It was about 1978 when they started listening to their british idols Ultravox and Giancarlo soon became one of the first "JohnFoxx wannabelike fellow". In the beginning there was only a strong and genuine enthusiam then came the songs and God, they were great!   There was a time when it wasn't so easy to be a post punk band in Italy (postpunk what?) and Underground Life were probably one of the first and the best for many years. Still I remember listening to the Flash radio station in my hometown Turin, with the voice of Alberto Campo speaking of a "new wave" movement in his programme called Evening star (later Puzzle). Thanks to Alberto for his work and his passion. The story told us that they never had a minimum of fame and success and this was (and is?) the music biz in Italy in those years. Giancarlo now is having a decent solo career and he's a good writer too. What remains now are a bunch of recordings from my old vinyl copies and you will probably smile at their "english as a second language" sound. But there were great songs with lot of heart, tears, rage and nostalgia... this was the italian post punk at its best and no one better came after...
Listen for your pleasure at "La Primula Rossa", a compilation of early recordings by Underground Life. Enjoy it!
lato A
BLACK-OUT! da "noncurance" 1979
DESOLATION BOULEVARD
da "fiori del male" 1980
KILLER da "fiori del male" 1980
NUOVE IMMAGINI da "cross" 1981
DECADENCE da "cross" 1981