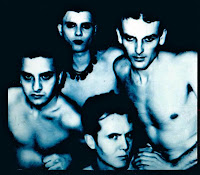 Neon is not a common name for italian post punk lovers. Born in Florence, the cradle of peninsula's wave, they were probably the first important post punk gothic band in our country and they are still nowadays one of the most active band in 80's Italian new wave time, still marking Italian rock history. The band, which was born first as a duo at the end of the 70's in Florence's undeground culture, soon stands out for its Kraftwerk and new wave icons' synth, which made their style a unique 80's cultural dream's specimen, together with newromantic and post punk tought of bands like Joy Division, Ultravox and Human League. In 1980, the band got off to an electronic start with the single "Information of death", and later, through several line up changes, it achieves to synthetize a mix of obsessive electro sounds, obscure athmospheres and quite original pop melodies which take shapes in later works like "Tapes of darkness" (1981), "Obsession" (1982), "My blues is you" (1983), "Dark Age" (1984); in 1985 "Rituals" sanctioned Neon as the best Italian new wave band of that year. Excellent studio productions and intense live activities has brought Neon to be one of the few icons belonging to alternative 80's Italian music scene.Marcello Michelotti's band, following a different direction from their well known hometown friends Litfiba, choosed a difficult electronic and experimental sound instead of easy rock'n'punk tunes. Their impressive abilty to combine dark and powerful sound gave us some of the best pages of italian wave. In late 2005 a cd box containing Neon's first vynil works has reissued: "Boxed", and it allowed audience to appreciate more and more quartet's emotional fund, innovative power and mainly showed its heritage into the international electro - wave scene. In 2008 two other cd issues: Oscillator, the first Neon concert back in 1979 in Florence and Memories, the best of Neon 1980-1986. In 2009 their first album "Rituals" was released in cd with 3 bonus tracks. The band is in activity, live and preparing a new cd album. Long live Neon!