The mile of miracles 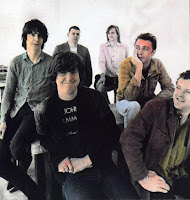 The original Harem Scarem slowly emerged from Melbourne's mid-80's indie scene, but, it could be argued, were closer in sound to classic Australian blues-rock from a decade before (Dingoes, Coloured Balls, Chain, Rose Tattoo etc.). Their sound was infused with a heady mix of punk spirit and Stax soul that also made them contemporaries of the likes of The Gun Club and the better known Beasts Of Bourbon. Harem Scarem first appeared on the Melbourne Psychobilly compilation “Asleep at the Wheel”. They soon developed (via the “Dogman” EP and some key line-up changes) into a powerhouse live act, where Christopher Marshall's extraordinary, passionate vocals combined with Charlie Marshall's stonesy guitar. The band were renowned for their dynamic blend of punk, blues and soul and ignited many a local stage in the 1980s. With a loyal following and upward trajectory of critical and popular acclaim they disbanded way too soon in 1987 when the brothers finally stop fighting one against the other. The Melbourne scene of the 80s embraced a wide range of music, but it was rare for a band to actually create their own genre with the panache that Harem Scarem did. Their first album, Pilgrim’s Progress, was originally released in 1986, and is a steaming chunk of urban blues from the Yarra delta. A little too hard blues for me but it surely kicks down the barroom door from the outset, with ‘Last Stand Man’, a bragging boast and challenge to any woman within earshot, followed by ‘Miracle Mile’, a great song, which makes it clear drinks are on the house. Then Harem Scarem pushed theirselves a little too hard, the fragile equilibrium of the brothers gave way, and they finally took our separate paths. But it was not the end, not for me... anyway, Chris the guitarist returned to academia while Charlie kept the name of Harem Scarem and went on to make one more album under that title. And so they reinvented themselves and came out their masterpiece called "Lo & Behold", strongly influenced by the Replacements and the american paisley underground groups. This is Lo & Behold, a strong lean rock album, full of great songs devoted to the americana style and to the the Aussie eighties sound, a bit remind me of Died Pretty and a bit also the boss Bruce, what a mixture!