A fist thru the glow 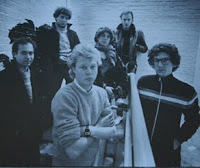 The Urban Verbs were at the center of a small but burgeoning music scene in Washington DC in the late 70’s.This band was born out of a city which was a cultural desert in the late 70's. A place where the suits went home at night leaving a ghost town till dawn. Like a comet streaking through the musical stratosphere the Urban Verbs were picked up on the sonar by such legends as Eno (recording two demos with him!) and Miles Copeland who was at the Corcoran to sign the B'52's and add to his stable of new artists including the comparatively disingenuous band Police. Perhaps it is a weird irony that the Verbs somehow evaporated into the night and were left to those of us that can call them our very own. But as John Foster wrote in 2008, "The Urban Verbs are not a tale of missed opportunities (although there were plenty) but rather a screaming success story". The band’s practice space at The Atlantis building was arguably the center of the DC scene. In 1980, the Atlantis Club became the 9:30 Club, which is widely regarded as one of the best independent-run venues in the country. Urban Verbs played their first official show in January 1978 and had a reputation as a must-see live band. But they also made concerted effort to reach a wider audience by playing punk shows. Traveling to New York to become the first DC band to play CBGB’s, luck would strike The Verbs in a big way. Sessions for their self-titled debut, produced by the legendary Mike Thorne, were underway. So the Verbs were signed to a two record contract with Warner Brothers in 1979 by Bob KrasnowThings seem to be coming together as the group travels to Toronto to open the fourth show in North America for an intense and highly hyped group. That band is Joy Division. In an event that seems unthinkable in today’s information age, they arrive to find the club closed. Apologies are passed out, as the club’s staff informs the band that Joy Division’s lead singer has just committed suicide and the tour has been cancelled. This tone would continue with a challenging second album recorded with Steve Lillywhite. The more challenging material and loss of a pop flavor left the band hopeful a breakthrough critically and commercially was around the corner. They wouldn't have to wait long to get the answer. Warner discarded them soom. With no label support, there was little to propel the band forward. It didn’t end in some big argument but rather just sort of stopped. Momentum was lost. But no one sounded just like The Urban Verbs during their time and no one has since. Unique and challenging music is something that never goes out of fashion.