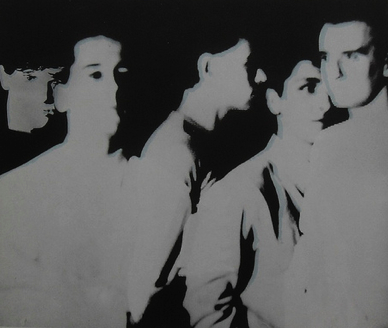 Simple Minds showed how it should be done. They attain the kind of elegant, outlandish falmboyance Wasted Youth and Martin Dance long for, without resorting to the tempting deviations the others use. There's no sign of visual distractions, the musicians are unobtrusive to the point of visual insignificance, with the exception of Jim Kerr, frontsman and actor, who with the whole of his face and form mirrors the frantic and flickering lines of thought in the lyrics. The rest of the band's energy is channelled into the music, and the result is an unnerving, rich sound, bursting with the inward tension and intensity of the music and jarred by the sporadic, unconnected imagery which leaves you, the voyeur, feeling as if you're clinging to the edge of the centre of a whirlwind, temporarily avoiding being sucked in by the atmosphere, watching the iamges and film clips pelting lunatically around. Over the solid, marble-like foundation the synth lays, Jim Kerr's voice, the fourth and most extravagant instrument, soars in neo-operatic arrogant melodrama. The guitars are confined to the background in most part, consistent but never stagnant, subtly enhancing the vigour of the vocals and keyboards. They started with 'Capital City', a grandiose parade through alien streets, portrayed by the promise-of-something-worse wail of guitars and keyboards with Kerr's voice soaring haughtily and lugubriously over. This filtered into the wonderful 'Factory', which has the vocals and guitars hiccoughing over the gorgeously rounded keyboard melody, until it all coheres and climaxes into a pealing, church-like refrain. "A certain ratio we know have left us..." The next song, 'Thirty Frames' with its chaos of hopelessness and euphoria, celebration and confusion was the most wildly subversive song of the night. Here, Kerr's despair ("I lost my job / Security / Self confidence / Idenity") is set against a whirling background of pulsating disco guitar and zooming keyboards. This sent the audience into a roar of unanimous approval. Pause for identification: stage left, Charlie Burchill, sweet-faced boy, guitarist. Centre, Jim Kerr, vocalist, all burning eyes and pale expressive face. Derek Forbes plays bass, a languid, feminine sort of person, and a tiny bit self-aware, with it. And Michael MacNeil, invisible behind his synthesisers, but a keyboardist of immense ability. Of course they played their single, 'I Travel', recently demolished on 45, but here taken faster and unabridged, a glorious and hedonistic tide of instrumentals, with Kerr being swept along indifferently, making observations in his haughty grandiloquence. Simple Minds played for nearly an hour and left me still dancing to the echoes of 'Fear Of Gods' while a hall full of exhausted people bellowed for more and more.
Terri Sanai - 'Sounds' 8th November 1980 (UK)