When the buses were red 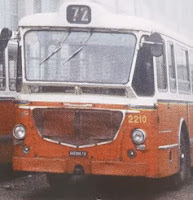 (Torino Calling 1982-87) - A collection of rarities & demos
28 years later there is still someone listening to that old post punk cassettes, with quite exotic titles like "City Delicatessen"or  "Space invaders" and "could have been" bands like Suicide Dada or Sythetic Sun? Yes, here I am, with my old rotten collection of demo-tapes. Nothing original and anyway nothing that survived the time... but sorry, i can't forget and this is still the music I like! So you have travel back in time once again and now you are in 1982 where a bunch of unconventional people, often dressed like scarecrows,  were deeply involved into "my" tkind of music... and they were called dark, goth, punks, skins, mods or wavers or they weren't called at all. But in the eighties they really were the only most visible form of alternative music and culture - oh yes, they were quite strange, but not enough bizarre yet. What kind of music i'm talking about? Well it's very easy to say, listening to this wave collection of joydivisionesque/robertsmithesque/marcalmondesque tunes, part punky but more introspective, a little dark and moody, sometimes emotional and quite artistic although no less rock and roll oriented. It was the same old story, even in Torino, north of Italy. Another town filled with disaffected youth facing miserable futures discovers new sounds through records & visiting artists. Then adventurous bands like Teknospray & Blind Alley starting to create their own style, twisting and turning guitar sounds into something new. The story told that, apart from Mr. Casacci, none of our local bands become national or worldwide artists, others at least have one or two moments where they briefly realize a dream of musical success, while many simply burn out and rejoin the real world after their youthful energy dissipates. Another beautiful failure, a scene that probably "never was" and suddenly died exactly when a "new wave" attempted to overthrow the very order of rock and roll. Those are still the days where I belong...