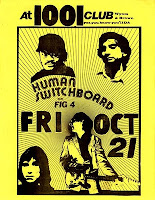 This reminiscence was submitted by Switchboard fan Y.B. Blinky.

The Human Switchboard was the second new wave/alternative/underground whatev band I ever saw live. The first one having been the Wombats, who played ahead of you at the first WRUW Studio Arama in the Mather Memorial Courtyard that was my very first show. It was 1981 and I was 17 and had just graduated high school. I ended up almost married to the Wombats' lead guitarist, but that's another story entirely. Me and my best high school friend were both at the WRUW show because we were music geeks with no social lives and had gotten into listening to Lars Harper's D.O.P.E. radio show every Saturday night, and calling up him and Larry Collins and generally being little Catholic fangirls, although we of course didn't see it that way and thought we were being very mature and hip. We basically had to browbeat my mom into driving us over to the show cuz she was very dubious about all this band stuff, but I was going to college at Case that fall anyway, so what could she do.So we got there really early and sat in the yard and looked at people's outfits and watched the soundchecks. I believe it was during your soundcheck that the mother of the bride and matron of honor from the wedding going on in Mather Chapel came onstage and started to raise hell about the noise. After that got worked out, my next memory is when you guys played a song with obscenities (I think this was "Book on Looks" where Bob sang "I don't care if your baby sucks, I dunno if she knows how to fuck" or something like that) and I was all like Oh no, I hope my mom isn't listening to the live broadcast because I'll catch hell when I get home! Not to worry, I learned later that her hearing and ability to discern lyrics was so bad she couldn't tell when people were swearing in radio songs. But I was totally worried about it at the time. We didn't get to see too many bands - I know we saw all of the Wombats set and all of your set and then there was some other band that we might have seen part of the set of, when my mom showed up and told us it was time to go home and basically hauled us away making a big fuss because she thought some of the chicks at the show were dressed too slutty. After that show, I went out and bought "Who's Landing in My Hangar?" It was one of the first records I picked up on Coventry after I was living at Case and could walk down Mayfield and get there easily. Besides listening to the record and playing it on my radio show on WRUW when I got one, I also read all the notes on the sleeve and went down to the library and checked out "Twisted Kicks" and read it, because it was mentioned on the album cover. I wanted to be cool like all you guys. I thought Bob in his sunglasses was like, the epitome of cool. I also remember one time walking back from Coventry I went around the corner and Myrna was standing in some apartment yard talking to somebody (dunno if she lived there or was visiting) and I was all like "Wow, that's Myrna from the Human Switchboard! I saw Myrna! Cool!" I didn't go up and say hi because I was too shy and anyway I thought of band people, even local band people, like rockstars then and figured they wouldn't want to be bothered with the likes of me so I was just cool about it. I did get to say hi to Bob a couple times when he was visiting Lars on his radio show. Bob and Lars together were like dangerous aging frat boys, humorous and sinister. I saw the Human Switchboard play a couple more times but not too many. In 1981-82 I didn't drive, didn't have access to a car, and for part of the year I was underage because they raised the drinking age in Ohio. The next year I started going with Johnny Wombat who drove me to all the shows I wanted to see for about the next five years, but by then it seemed like the Human Switchboard wasn't playing out as much. Lars moved away and I took over his radio show, which made me happy and sad at the same time. When I graduated I moved to Maryland and I used to see copies of Bob's "After Words" album (I think that's what it was called) in the marked-down alternative bin of the local record store, along with Death of Samantha's albums, and that was very weird, like seeing your past life flashing before your eyes, because five or six years is a lot when you're only 23. Sometimes over the years I have heard or read in the paper stuff about one or the other Human Switchboard member, and it always takes me right back to being 17 and on the verge of An Exciting New World with college and new bands and all. I still remember a lot of the songs and I have never figured out what's being sung on "Refrigerator Door" that sounds like "Mareechko Baby" but it's kind of cool leaving that a mystery so I have never tried too hard to find out. Well that's my silly little Human Switchboard story. Hope you enjoyed it .Thanks for the music.