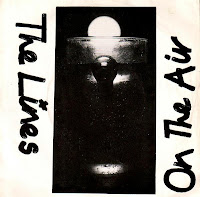 The Lines began their existance in the late seventies with two scrappy DIY post-punk singles with a slight whiff of '60s pop influence a la early Soft Boys/Monochrome Set. Later, the renewed line up of the band improved their rhythm section simultaneously tightened up, locking into the grooves with more intensity, and loosened, opening up beyond straight rock beats into funk and R&B undercurrents. At the same time, the guitars started taking on more of a textural, atmospheric disposition. From there, The Lines grew by leaps and bounds. Over the course of the next recordings from late 1980 to '81, they dove into the deep end of of the pool, turning out bewitching tracks awash with funk rhythms, ambient textures, and avant-dub production techniques, sometimes abandoning traditional song form entirely in favor of exotic sonic tableaux. Ultimately, it's the kind of stuff anyone from Tortoise to the Rapture might have claimed as influential... please buy their remastered cd editions full of tracks, sessions and demos!