Look back in anger 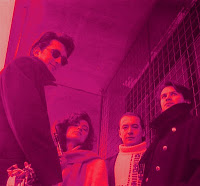 Intelligence Dept was an Italian New Wave band from Ferrara (Italy) who formed in 1982, during one of the most fertile year for the post punk sound in our country. There were lot of synths & programming machines all around Europe at the time but there was also a new sound incoming from the last singular adventures of Robert Smith & Bernard Albrecht. Their influence was terrific here in Italy, more than the Beatles in the sixties, more than the Zeppelin in the eighties... The coldwave movement spreaded his influence from Northern Europe, where maestros like Isolation Ward from Belgium & Siglo XX from France defined a new deeply emotional music. It was not so strange to find these middle-european influences in our provinces also because that particular style was a winning sound in the well known italian discos, the only places where the poor italians boys could eventually go and enjoy some music. Suzanna Zaghi's Intellingence Dept played together for five years with not much of a success but this is a common story... Anyway, they recorded & distribuited by themselves three interesting demo-tapes: "Sleeping City" (1984), "The Big Trouble (1985) & the more mature "Intelligence Dept" (1987), but they never had the possibility to record their own album. Three songs of "Sleeping City" were included in the 12" LP "A White Chance" (1985) & one out of these songs, "Anger Inside", was also contained in a compilation on cassette published by Fare Musica (an Italian quite famous music magazine). It seems that Mannequin records will soon realize a post humous compilation by the band during this year. Wait for it!